I am legend, Richard Matheson

April 16, 2012
Pretty intense and a breathlessly frenetic read. I don't think I have blown through any book this fast in the recent past.

( disclaimer: I have seen the 2007 movie: while I loved it I think the book outdoes it any day!) 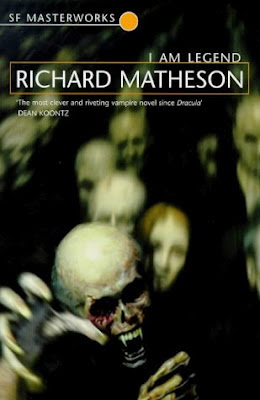 I am Legend, is a classic. One that has led to a lot of great books & countless movies. For a book originally written in 1954, it has hardly aged at all. A classic that dwells on a number of themes: Vampires/zombie, Post-apocalyptic earth, Survival, Science, the darker side of humanity dealing with loneliness, confusion, fear. I am astounded by the sheer imaginative power of Richard Matheson; a quick google leads me to learn the man is credited with a lot of film-scripts as well as best-selling science fiction books. He's more like your intelligent man's escape into the imagined world. of how things would turn out if you're the only "living" being stuck on earth after it's been wiped out by a plague of unknown origin. Simply loved it.

A short read, but very powerful one at that. I was craving to write a long deep review of the book, but am refraining from that. I know, this book's been flogged to death in the blogger world of books and I wont add to the din. But on a personal level, I was right there living through Robert Neville's nightmare - of having been stuck alone in a world, inhabited by the "Un-dead".

At soul - it is ultimately a vampire novel - make no mistake - the way Matheson starts racking up the tension levels right from page one, you're convinced you're in mortal danger all through. Robert Neville, the only man left alive, has to contend with cleaning up the streets of dead vampires by day and is left imprisoned in his own house by night when the streets are filled with the blood-thirsty ones, baying for his blood.

But unlike most, Zombie novels that don't really dwell on the "cause" - the author isn't averse to veering into the "arcane" territories of biological sciences to try and explain what has caused the wipe-out. He does a commendably believable job of it (my high-school bio lessons seem to come crowding back!)

Anyways, the book is not about the un-dead though. it's an absorbing, fascinating character study of Robert Neville. It's clearly written at a higher intellectual plane, taking us deep into the dark psyche of Neville, the lone protagonist of the story as he tries to lead a "normal" life. The loneliness of such a desultory life is deftly etched out by the author in very poignant terms. Music, smoke and drinks are the only remainder of his early life. It's a deep scarily dark place, the mind of Mr. Neville.

and that is what sold the book for me. it's a winner as it deals with human trauma and how the human mind deals with it. A beautiful book with a fantastic twist at the end of the tale. The twist when it comes, rest assured, will blow your minds off.