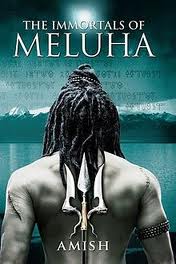 I should generally have clung onto my resolve never to read conventional best-sellers in India. But no! I had to give into the hype and get sucked into the general euphoric whirlpool that surrounds me.
“Immortals of Meluha” was one such book. It’s an accomplishment.
Understatement. Accomplishment would be de-meaning to say the least. It would have been an accomplishment if you’d told me that the author was perhaps, ten years old. Staggering for a ten-year old. But heck, no, it has been penned down by a management grad who’s also a part-time i-banker now. (Part-time, as of now because the books been on the best-seller stands for quite some time and every bookstore promptly/proudly displays the book on its glass-shelved windows! Oh beg pardon, last I heard he’s actually QUIT!)
Anyways coming back to the book – the protagonist is Shiva, a stoned Tibetan who loves his marijuana and makes outrageously bad jokes ( that even makes the P in PJ’s cringe)who decides to move his tribe to this paradise called Meluha ( set in Kashmir, welcome to India)and settle down here for good. Life’s good, you got good samples of weed, another addictive elixir called Somras (God’s drinks) which promises longevity and good health (apart from mild discomforts of giving him a blue-throat), princesses and hand-maidens ready to chase around trees. But alas! Good things don’t last forever. He finds himself to be the center of attention because of his blue-throat (some weird kind of super-power huh!) – He’s actually the deliverer from Evil for this whole kingdom they’ve been waiting for, for centuries.
You’re born into your destiny, you may run, you may hide but you can never escape.
Classic superhero stuff really. You get thrust into unlikely situations, with responsibility you never wanted thrust upon you and finally you come out trumps. Simple plan. And Amish sticks to this doggedly. Siva turns out to be the unlikely hero, gradually winning the hearts over, including that of stubborn sati (love-interest) and the egoistical general (Strong Paternal Father figure).
The plot flows. It never ebbs. Events unfolding one after the other. And it’s admirable how Amish has turned out mythological stories and given them a nice believable touch, weaving in countless folklores and characters from Hindu mythology into his narrative. He brings to life a lot of practices in the Indian culture that leaves a warm after glow.
Am afraid that is all that's the good stuff. His narrative is so jarring that I almost stopped in the middle. You don’t realize in the beginning, but as the story unfolds, you expect the jitters to settle down and the author to get to his own, telling an admirable story. But no. Amish writes like he is writing his school literature project (unguided at that!) the language is horrendous. ( blame me of course, I have been spoiled silly by the likes of Steven Erikson and G RR Martin, but I gave the guy enough rope to come up good!)
Set pieces and action scenes are abrupt; X pirouetting with a sword was the best move he came up with. Romantic interludes between Shiva and Sati left me cringing and diving for cover sometime. Sample this:
“Why would I not want to touch Sati? I want to keep touching her in every possible way throughout my life!”
Character development of Siva, was probably another of the saving graces. We see him grow throughout the book, finally accepting his destiny and growing into it. Side characters have been left right there. On the side-walk. Neglected and forlorn. He also weaves in an element of mystery with the help of “Old Pandits” who counsel and advice Siva whenever he’s lost. The “nagas” also was an interesting touch – let us see how he builds up on that promise though.
I am not sure, if I will risk another venture into the “happy zone of weed-loving Tibetan stoned Messiah” again though. I have heard Amish tries to go “Literary” in his second book by concentrating on his language rather than story. (Shudders!)
May the Force be with you. Or better said, May the Weeds be with you.
Two out of five. One for the myth. One for effort.
Book Review hindu mythology siva