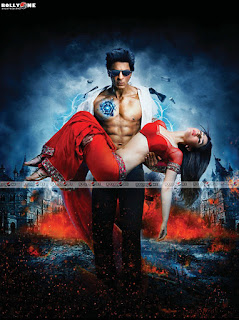 This was a ritual that we had to do. To pay homage to the biggest bad-shah of Bollywood when he came back alive on the big screen after like close to eighteen months. So there we were, two days after a super exciting and exhausting diwali, hauling ourselves to watch Ra.One, the biggest blockbuster release of diwali 2011.
First impressions as we walked out of the theatre, the movie is definitely NOT as BAD as the critics have panned it to be. Frankly, I had not read any reviews of the movie, for fear of letting the bad reviews cloud my judgment. But yeah, not one of the most memorable movies of King Khan either. The real reason, if you ask me, was that this movie is after all about a video-game. And how much soul can you put into a video-game?
Warning: Mild Spoilers ahead.
The annoying real-life Shahrukh, plays a game developer/scientist who is a tamil stereotype who eats ( nay, practically slurrrps up ) noodles with thayir (curd!) and mouths ayyoo for practically anything and everything and is dying to win his son’s affection. But don’t worry , the annoying twat that he is, the producers knew he wouldn’t be the crowd puller, he gets killed when the game he builds comes to life with a mean-ass baddie who cant be beaten. A-la Ra.One. The mythological demon-king with ten heads. 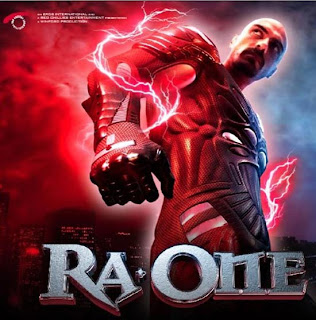 The pace picks up immediately after this and never once slacks up till the last frame rolls by. In spite of repeated attempts by dear sweet chammak bimbo Kareena to get a robot to be romantic. A mention for the new kid on the block, barring his irritating silky golden-retriever hair-style, he’s got potential. Actor material certified. Another word for Arjun Rampal. The best looking villain evuh on Hindi big screen. Sad that he hardly gets screen time.Ah well, there was one more thing that stayed with me. SRK's introduction is one of the  most memorable I've seen in a long time. How he takes on the Bruce Lee sisters - iski lee, uski lee and sabki lee. I was laughing my guts out for the first few minutes.
The movie stunts are fantastic, the VFX being top class for a bollywood movie; especially the train scene was scintillating. Songs are mostly forgettable, except for the “dildara” number. The much touted “criminal” song by Akon was an eye-sore. The most hideous dance number I’ve seen on screen in a long time. The item song was okay; Kareena got to play herself there. Thank the producers.
A very average movie after all the hype. Can’t blame the King though. He plays himself, having fun throughout the movie, inspite of being trapped inside a robotic avatar. What’s in it for you? Well, you could watch it for the stunts, the item song and well, c’mon it’s after all, Shahrukh Khan back on big screen.
Do you really need an excuse?
movie review ra.one shahrukh