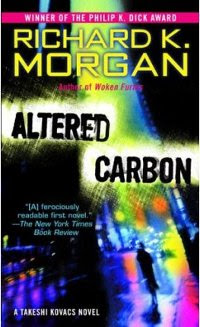 Finished the altered carbon, debut novel by Richard Morgan last week. Would be an understatement to say that I was blown away by this book. It marked my foray back into science fiction after ages. And I loved the same. My mind is still blowing in the air :)
Anyways, I chanced on the book after I read the extract of his latest foray into Fantasy, The Cold Commands, Book two in the series, a Land fit for Heroes. This marks his return to the much acclaimed foray into the lands of Fantasy. Be it fantasy or science fiction ( we are talking Takeshi Kovacs vs. Ringil!) rest assured of one thing – there will be a lot of cool action, gut-wrenching, blood-spurting in-your-face violence, swearing that would put coastal fisherfolk to shame and even graphic depictions of sex. However none of that will ever take away the sheen from the sheer tour de force that his books are. Compelling reads peppered with intelligent ideas and brilliant flowing prose, in a pace that never lets up.
I read the epilogue of Altered Carbon and then there was no stopping me. I had to complete the book to find out how Takeshi Kovacs extricates himself from the little spots of trouble he gets stuck in. Yes, he lacks finesse and thinks the wrong end of the shotgun barrel is the end solution to any problem and can’t be bothered to think too much, but heck, we love the action don’t we! And the book has enough to keep you satisfied. An overdose of it, seriously, but Morgan has definitely managed to tie it in pretty well by the end of the book. It is a fast read, I don’t know how long though as I read this on my kindle. Altered Carbon has a brilliant premise – humans can never die. Their entire consciousness is stored in a cerebral “stack” as he refers to them and be transported to new bodies ( or “Sleeves” as is ingeniously referred to!) Virtuality is cool. And his imagination takes all these to the next level.
I would definitely be looking forward to pick up “The Steel Remains” where he has strayed away from his forte, Sci-Fi and has dabbled in my favorite genre, Fantasy. A solid debut effort that doesn’t read like one at all. Have got all this science fiction ones lined up as well.
Four stars. Hats off.
Book Review richard morgan science fiction takeshi kovacs