So I loved NYT Bestselling and RITA™ Award-winning book Forget Tomorrow by Pintip Dunn that came out roughly the same time, last year - and am super excited by the next part in that series, Remember Yesterday that released on Oct 4th, excited enough to sign up and be a part of the tour!

The full schedule can be found here. Oh and don't forget to read on to the end - to take part in an exclusive give-away associated with this tour. 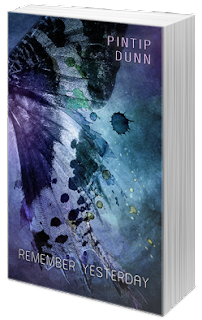 Sixteen-year-old Jessa Stone is the most valuable citizen in Eden City. Her psychic abilities could lead to significant scientific discoveries, if only she’d let TechRA study her. But ten years ago, the scientists kidnapped and experimented on her, leading to severe ramifications for her sister, Callie. She’d much rather break into their labs and sabotage their research—starting with Tanner Callahan, budding scientist and the boy she loathes most at school.

The past isn’t what she assumed, though—and neither is Tanner. He’s not the arrogant jerk she thought he was. And his research opens the door to the possibility that Jessa can rectify a fatal mistake made ten years earlier. She’ll do anything to change the past and save her sister—even if it means teaming up with the enemy she swore to defeat.

You could get your hands on the book here:

Pintip is represented by literary agent Beth Miller of Writers House. Her debut novel, Forget Tomorrow, won the RWA RITA® for Best First Book. Her other novels include The Darkest Lie and the forthcoming Remember Yesterday.

She lives with her husband and children in Maryland

A few seconds later, Tanner comes barreling down the circuit, just as my best friend predicted. Ryder gives me a little shove. "Quick, do another one of your tricks."

My mind whirls. "Which one?"

Moving fast, I set my hoverboard on the coping. But when I push off, my balance is wrong. The board doesn't feel glued to my feet. Instead, it slides out from right under me.

Keep loose! I hear Ryder's voice in my head. Roll.

I hit the concrete with my shoulder, keeping my elbows tucked in. I roll with the fall, spreading out the impact. I do everything right, but curse the Fates, it hurts. A LOT.

"You okay?" a voice says from above me.

Squinting against the sun, my eyes travel up a pair of baggy cargo pants. I hit the low-slung waist, and my breath -- what little there is of it -- catches. The light grey thermal shirt hugs his abdomen, and I can see every line, every ridge of his six-pack. My gaze continues up, and I see a broad, well-defined chest and long, ropey muscles. I swallow hard. Whoever my rescuer is, he's hot. Really hot.
Almost in a hurry now, I drag my eyes further up. Surely, his face will be as pretty as the rest of him. Surely, he'll have the kind of eyes that will pierce right through me. Surely --

I see a lean, chiseled jaw and soft, kissable lips. Black, tousled hair brushing up against dark eyes. But the eyes don't pierce right through me. Instead, they're . . . laughing . . . at me.

Oh, good Fate. Was I actually checking out Tanner Callahan? What in limbo is the matter with me?

He holds out a hand to help me up. "You know, the six-inch curbs are over by the entrance. Maybe you should master those before you attempt a real drop-in."

My cheeks flame. "I'm not a beginner. I've been dropping in practically since I could walk."

"Oh, really?" His eyebrows raise, disappearing under his fringe of hair. "Could've fooled me."

I stare at him. This was not going the way I expected. "Did you not see me land the heel-flip trick? That's the sickest stunt of the day."

"Guess I must've missed it." He smirks. Did I think those lips were kissable? More like smackable. Of course he saw me land the trick. He was standing right there.


Ignoring his hand, I push myself to my feet, even though my elbow stings and my knee burns. What a condescending jerk. He's just trying to get a rise out of me. No wonder everyone says he thinks he's fate's gift to the world. He's just like every scientist I've ever met.

·         One (1) winner will receive a limited, annotated hardcover of Forget Tomorrow