Interview with Ishbelle Bee, author of The Singular and Extraordinary tale of Mirror and Goliath 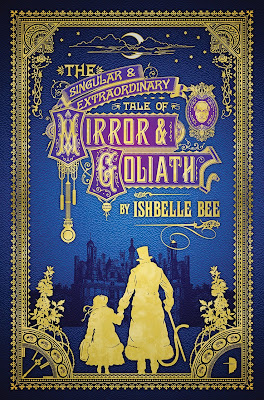 So the folks at Angry Robot were kind enough to connect me to Ishbelle Bee for a Q&A on her novel, her writing and lots more! Let's give a rousing welcome to Izzy!


1. First of all, for those who are not familiar with your work, tell us a bit about your new book, The Singular and Extraordinary Tale of Mirror & Goliath.
HELLO SMORGASBORD FANTASIA!
Mirror & Goliath is a fairy tale set in the Victorian period.  A little girl is locked inside a grandfather clock and she is rescued by a policeman who becomes her supernatural guardian. The Lord of the Underworld orders his assassin/son Mr Loveheart to hunt her down because he wants to eat her and absorb her powers.
2. How did you go about drawing up the characters of Mirror & John LoveHeart?
Mirror was inspired by the powerful, matriarchal Bene Gesserit in Frank Herbert’s DUNE of 1965. I wanted a ‘Reverend Mother’/ priestess type character in the guise of a little girl. I was also interested in creating a character who was vessel for something else and which played with the idea of exorcisms and demonic possession.
Mr Loveheart was inspired by Gene Wilder’s portrayal of Willy Wonka and David Bowie’s portrayal of Jareth in the film Labyrinth. There are also some elements of Peter Pan about him. I wanted him to have an obsession with good quality cake as I get really naffed off when I eat a dry bit of sponge!
3. While there are tons of interesting side-characters I want you to expound on, I will not be greedy and for now settle just on Goliath, who has been my absolute favorite in the book. Tell us the inspiration for Goliath.

The character of Goliath was going to be priest as I wanted, initially, to write a book about exorcisms and the idea of having a demon inside a child. Goliath is huge, hairy and wondrous.  I suppose the inspiration behind his character is King Arthur’s Knights which reflect his purity and bravery. He encompasses elements of the chivalrous and has a huge heart and great love for his ward Mirror.

4. Is this going to be a standalone? Or can we expect another visit to the weird and wonderful fairy tale world of Mirror and Goliath?

No, this book isn’t a standalone. The second book in the series  is being published in August and I have written a further two books of the Peculiar adventures of Mr Loveheart, and I will be working on another one this year. I have also written a ‘Christmas Special’ book - set oddly enough at Christmas! - which features an adventure with Mr Loveheart whilst he’s doing his Christmas shopping. The characters of Mirror and Goliath however (at the moment) don’t appear in any future books, but I have been thinking of a possible story set in Egypt which I might write next year involving them.

5. How did you start writing ? Was there a particular book or moment that spurred you on?

Boredom and isolation spurned me on.  I have been writing since I was a little girl - really crappy poetry, short stories and weird film scripts. I was in my late twenties when I started writing novels.

6. Tell us a bit about the whole publishing story behind your debut. I’m sure there’s a tale there.

I wrote Mirror & Goliath and its sequel The Butterfly Girl in 2012 whilst I was working full time and when I had completed them I started looking for a literary agent. It took me 6 months to find representation. I signed with Bryony Woods in 2013 and six months later I signed a two book deal with Angry Robot.

7.  Any insights you want to share to the aspiring authors out there?

Only write what you want to write and don’t seek a career as a writer because you want fame and fortune. That really pisses me off, when people just want to make millions. I recently had a conversation with an aspiring author who was purely concerned with how much money he would earn. If your prime concern is money and a huge twitter following then you’re not a writer- you’re just a fame seeker. Find a different career path.  You should do it because you love to write and for no other reason.

8. What is the hardest thing about writing? Writing Urban-Fantasy in particular?

In relation to urban-fantasy my main concern is characters. The world around them is a theatrical backdrop so my world building is secondary and adapts for the characters.

9. What kind of books do YOU read? Any favorites?

I am currently writing my fourteenth book, so I am sitting on a rather large pile of books, like a grumpy wizard in an occult library. The book I am writing at the moment is about the Scottish witch trials. It’s based on historical accounts whilst blending fairytale elements and I’m really excited about it. Sadly, I can’t tell you any more, but watch this space!

THANK YOU very much for the interview!
Angry Robot Author Interview Ishbelle Bee