Age of Iron by Angus Watson

September 17, 2014
Writing historical fiction can be daunting and exciting in equal measures. Especially when it is about times little known. Like the times before the birth of Christ. Right. The dark before the dark ages.

Author Angus Watson uses this opportunity along with painstaking research findings from his life body of work - to give us the tales of the Iron age in his debut book - Orbit's latest, Age of Iron set in South Great Britain circa 61 B.C. Sound interesting ? You bet it is.

A ride on the dark side of time - before the world had settled into it's rails - and set in the wildly exciting and highly conflict-ridden realms of an unexplored Great Britain - how wonderful is that, thought I as I requested for a Galley Copy of this book.

And as soon as I cracked open the book, I was swept headlong into the twisty proceedings. Right from the initial battle scenes of Barton where King Zadar's sweeping army routes the ill-trained and ill-equipped rag-tag army ( "A group of mad boys slaughtering geese") put together by mad superstitious druids  - Where we first meet Dug Sealskinner - "A down-on-his-luck mercenary travelling south to join up with King Zadar’s army".

Dug is a well-meaning "Warrior" - from the North, who's seen his fair share of bloodshed and violence. While not a particularly brave man, Dug's survived countless wars and lived to be an old man. ( "You can either be brave or old. Not both.") Now on the wrong side of Zadar's army - fleeing from a rout, Doug meets up this precocious girl Spring who has a way with words, asks too many questions and is generally pretty resourceful enough to get them out of scraps.

On the other side of the fence, Lowa Flynn - one of the most celebrated Elites within Zadar's camp, experiences treachery firsthand as the night of drunken celebration, she watches her sisters get chopped down in cold blood. She escapes and meets up with the duo of Dug and Spring. From there on - Lowa's single-minded focus is to avenge her sisters and kill Zadar - while all Dug wants to do is retire by the beach and catch fish - Spring is happy to be around Dug. But with Zadar's hounds sniffing on their heels, there is never a dull moment. The threesome hatch a plot together to kill Zadar.

A larger plot that wheels outside this drama is the advancing army of Romans hell bent on conquering the Isles of Brits. Ragnall, a young man just having completed his studies of "magic" on his way home -finds his entire tribe wiped out by Zadar and his beloved kidnapped. He too thus has a score to settle against the evil and all-powerful King and he is aided by his master Drustan.

It sounds like a simple enough plot-line but there is so much going on - with multiple point of views across 3-4 main protagonists that one or the other storyline will envelope you as you read along. And the dry humor lights up the pages like no other.

Of course - the most interesting one, for me was the strange but winsome friendship between the world-weary warrior Dug and the inquisitive and nosey-parker kid, Spring. Her questions baffle the warrior and it's sheer fun to listen to them banter along. The analogies are completely out of this world. And Dug with his self-deprecating gallows humor is a hoot. But Spring is no "spring chicken" as you would slowly come to know when her secrets are revealed later on.

Lowa is a remarkable protagonist - a warrior bred for battle, the treachery at the hands of her King snaps her back to the sad reality of her situation. Of the grim state of affairs where the tyrant Zadar in the name of unifying britain is actually blowing through decimating tribes - leaving poverty, sickness and misery in his wake. Lowa's repentance and her acts of valor mark her out to be central character in the whole series trilogy and am sure Angus has big plans for this "xena warrior-princess." You know for a while, she reminded me of Monza Murcatto from Best Served Cold but hey, this one's a lot more likable and human.

What is most compelling is the historical world that Angus fleshes out.  Of the life and times of tribes of South Britain in 61 BC of which not much is known or documented - Angus effortlessly brings to life the details. The livelihood, the food, their vocation, the battle strategies - and all this in a pretty engaging manner as the plot whizzes along. Magic, as practiced by Druids starts off as petty nonsense about reading the future in the entrails of animals but builds up to be a pretty interesting and critical component of the narrative. The aura of mysticism is retained - with the nature of magic unexplained. For as Angus claims, if Jesus could make wine out of water and bread a few decades later, it is possible others knew just a little bit.

Also in play are tons of interesting thoughts on religion, philosophy, culture and notions of power - all wrought about in Angus' own original style. Initially the conversation seemed a bit forced in all the mannerisms of a modern-day dialog , albeit filled up with interesting expletives ("badger's bollocks" - Spring's temper tantrums are an absolute delight to read!) but Angus soon owns the same in a smooth manner integrating this with his pre-christ era settings.

It's been touted to be "Game of Thrones as brought to screen by HBO" - as gritty and splashed with gore. True, it stretches the bar for the level of violence and bloodshed - and the wall-to-wall action is pretty fantastic throughout the book - but I would see this more as a necessity for the life and times chronicled. Hell, I could have done without some graphic torture sequences and the casual violence meted out but all part of the parcel, Age of Iron packs quite a punch.

If you like your fantasy action-packed, drenched in gore, dressed up with some black gallows humor - and revealing quite a bit about an age we know nothing about, then Age of Iron is right up your alley. Angus Watson brings us a historical epic, the first in a political sword-and-sorcery series that is sheer fun, full of pulse-pounding action and filled with some unforgettable characters. I will be clued in on this series for sure!
2014 Books Angus Watson Book Review debut historical fantasy 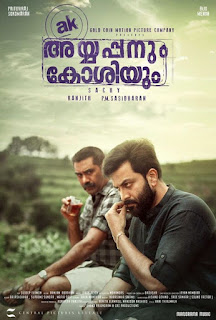 So I know we are all in for the long haul, biting our nails, scratching our heads, wondering how to kill so much of extra time we have on our hands, now that we are "working" from home. Well, if you love movies/ series or are enthralled by the Malayalam movie industry (as you should be!), then here are a few current "trending" ones, definitely worth your time across various OTT platforms.


Why watch: Powerhouse performances by both the lead actors, Prithviraj (his role selections have been a hit and miss usually, but this time!) and veteran Biju Menon. Taut little story about how a minor mishap snowballs into a vengeance drama fuelled by inflated male egos between a senior SI and a retired havildar. Ebbs and flows till it finally hits the flashpoint. Set in the backlands of remote villages on the border of Kerala/Tamilnadu, the folk songs and the rustic setting add a different …
Read more